After my summer roll from BEP, I decided to get something sweet but cool since it was a terribly hot/humid day (typical New York summer…). I had passed by the Kelvin stand on my walk-around of the whole market and kept it in mind for an after-lunch treat. So I returned to check out their slushes!

Kelvin Natural Slush Co. hit New York streets in 2010 as a food truck serving up all-natural slushes with fresh fruit mix-ins. I actually passed by the truck a bunch of times in the West Village but never really checked it out. They’re still driving around New York City (follow their twitter for truck locations) and you can find them at Smorgasburg on the weekends as well. 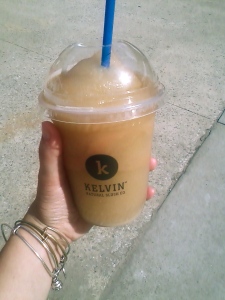 At the Kelvin truck, their menu consists of base slushes (Spicy Ginger, Tangy Citrus, or Green & Black Tea) which you select and then you have the option of choosing a mix-in (extra mix-ins cost a little bit more) which are fruit purees including white peach, raspberry, pink guava, green apple, caramelized pineapple, cherry, pear, blueberry, mango, or strawberry. You can also opt for chopped mint and basil on top. They also do a Kelvin Float which is a Kelvin slush topped with a scoop of organic ice cream from Blue Marble Ice Cream.

At their Smorgasburg stand, the options were a little more limited but you could choose between an Arnold Palmer base and a Citrus base. The mix-ins they had were white peach, blueberry, strawberry, and mango. A slush + mix-in cost $5.00 and extra mix-ins were extra (I don’t remember exactly how much). I went for an Arnold Palmer slush with the white peach mix-in, since I was feeling like tasting some summer flavors. The slush was actually pretty big and definitely worth the price. I was a big fan of the Arnold Palmer base since it was a good mix of their tea and citrus flavors– I was looking for something refreshing and it definitely was! I thought the white peach puree was really tasty and a great addition to the slush. It added a little sweetness to the slush (which isn’t overly sweet) and also some fresh fruit flavor that complemented the base. I’m sure all of their mix-ins work with every slush base, but picking that right combination is where the money is. I would definitely recommend the combination I went with, but I’d love to go back and try out other slush combos.